A staple in Italian cuisine, it is said that Italians eat over sixty pounds of pasta per person, each year!  When selecting the pairing of pasta and sauce, there is one general rule regarding compatibility. Allow Italia Regina to assist you with these choices! Choose from our vast selection of excellent 100% Italian products, that will bring the taste of the Italy straight to your table!

These products are ideal for corporate gifts. The minimum order is 50 pieces, available in 10 working days. Ask for a quotation: info@italiaregina.it

The ancient origins of pasta can be traced back to the Neolithic age when man began cultivating and subsequently grinding cereals, kneading them with water, then baking and drying in the sun to keep them long.

Dry Pasta was first created in the Southern Island of Italy, named Sicily, in 1154. It was produced for long-term preservation, making it easy to transport to distant destinations. Subsequently, the pasta was transported to Liguria, on the west coast, where it then began being transported all around northern Italy.

To the aristocrats of Italy, pasta was considered a side dish, while for the less wealthy, it was a special meal. However, the severe famine in Naples in the 1600’s, pasta, due to lack of other food, became a mass food and production and conservation techniques were thus improved. Further into the middle ages, a new method of boiling was also introduced, and new formats of pasta were created, including the first forked pasta.

From Italy, it was then exported all over the world.

Today pasta is the symbol of Italianicity excellence. 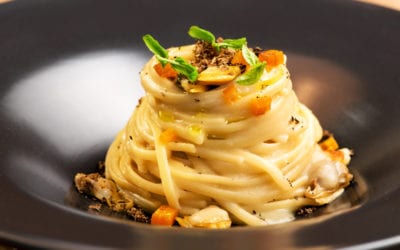 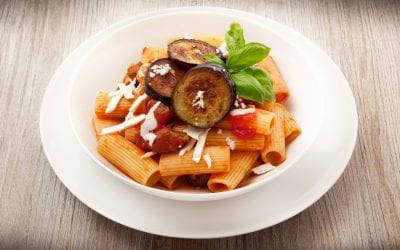 Pasta Alla Norma is a first course that contains the aromas and flavors of Sicily, an island in southern Italy. Pasta Alla Norma is one of the symbols of the Isolana cuisine, originally from the city of Catania and was created as a culinary tribute to the work... 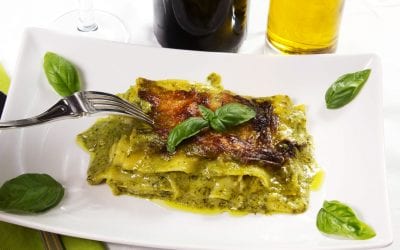 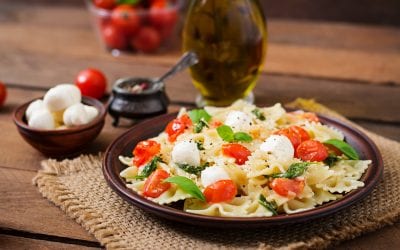 Caprese Pasta, is a fresh and simple dish, which cheers the tables with taste and is appreciated by the whole family. Perfect for the summer during the hottest days, it reflects the Mediterranean flavors and colors of the flag of our peninsula.      ... 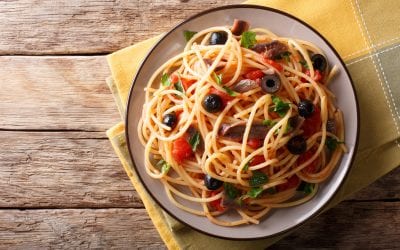 Spaghetti Alla Puttanesca are a typical dish of the regions of Campania and Lazio, in southern Italy. Just a few minutes to prepare them and to get a really tasty result, with a touch of spicy given by the fresh chili. 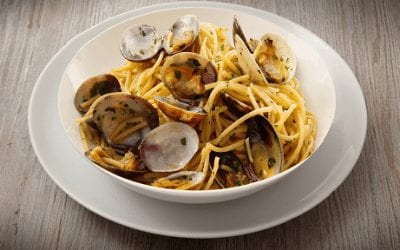 Spaghetti with Clams is one of the best known Campania pasta dishes, a simple recipe where the delicacy of clams meets the Italian pasta tradition for an awesome result. 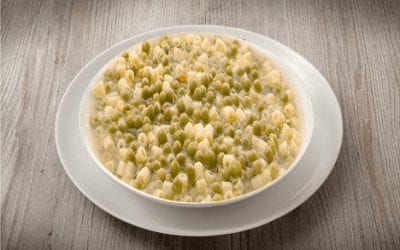 Pasta & Peas is a fast and easy first course to make every day in any occasion. It can be considered a "save dinner" if you do not know what to cook, in a few minutes you will have a dish that will surprise everyone!           Ingredients:... 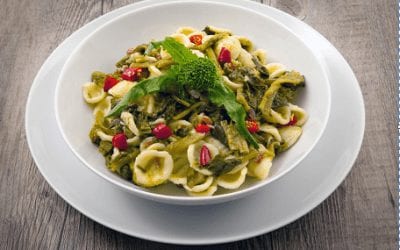 Orecchiette Pasta with turnip peaks and chili peppers is an amazing first dish during the winter period. Orecchiette is a form of fresh pasta made from hard wheat flour, handmade, representing the gastronomic symbol of the Puglia region. The perfect condiment for the... 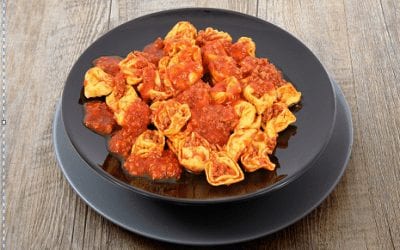 Ragù Tortellini mixes best two dishes of Italian culinary tradition: the Emilian tortellini and Bolognese ragù. Tortellini, both in broth and ragù, are a dish known all over the world: a thin dough of pasta that contains a filling of meat and parmesan for a first dish...

Spaghetti with Shrimp is a typical dish of Italian culinary tradition created with few ingredients and suitable for many occasions: a light and fast lunch, or a family dinner or friends. The perfect union between tomatoes, fresh shrimps and a pinch of chili pepper...

Pasta & Chickpeas is a typical dish of Campana, Apulian, Sicilian and Roman cuisine and has ancient origins. Chickpeas are always a great nutrition alternative to meat or fish. Chickpeas have always been a real salvation for the poor diet of the peasants who... 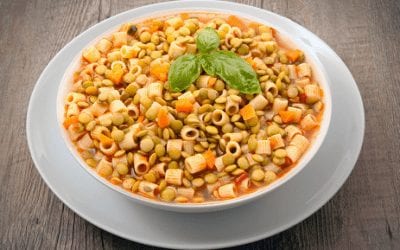 Pasta & Lentils is a typical dish cooked by grandmothers and handed down from generation to generation. It's perfect for the cold winter evenings. It may have a dense or more liquid texture and can be flavored for example with bacon, so it can be also liked by... 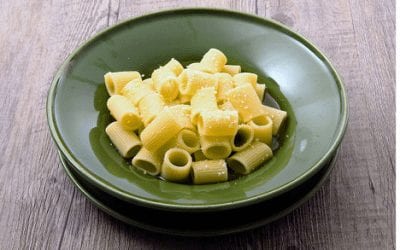 Pecorino and Pepper Manicotti Pasta is a typical dish, along with the carbonara pasta, of the tradition of the Lazio region. It is a simple recipe, created with only two ingredients: the creamy of Pecorino cheese and the decided taste of black pepper.    ... 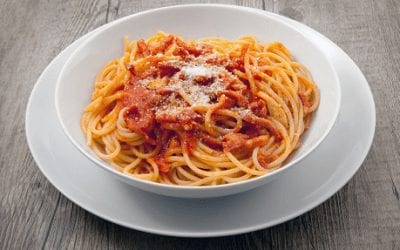 Hot Chilli Spaghetti a perfect union of three basic ingredients of Italian culinary tradition: pasta, tomato, and spicy chili. It is loved by those who like the decided and strong flavors!           Ingredients: 320 g of Spaghetti pasta 400 g... 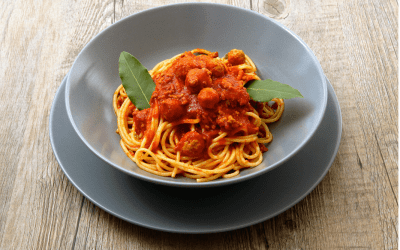 Spaghetti with Meatballs are a tasty and easy to prepare a dish, loved by all adults and children. if tomato spaghetti is one of the most popular dishes in the world, with the addition of the meatballs this dish will be even more special!        ...

Spaghetti with Clams is a simple recipe with few ingredients but that will surprise your guests with a tasty sea flavor. You can use fresh clams (as in the recipe) or frozen.           Ingredients: 320 g of Spaghetti Pasta 1 kg of Clams 1... 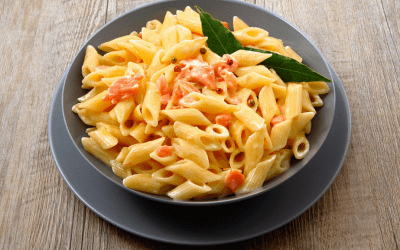 Salmon Penne Pasta with cream is a recipe that you can prepare in a short time, is simply because they serve few ingredients, it is liked by everyone and always does her beautiful shape.           Ingredients: 300 g of Penne Pasta 100 g of... 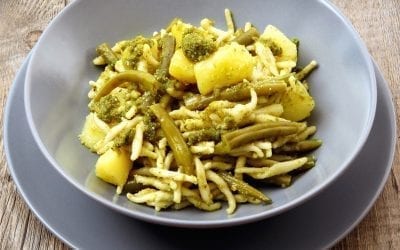 The basic recipe for pasta with pesto (basil sauce) is very easy if you have the right ingredients. Put in a pot 2 liters of water and warm up until it bubbles. Add a spoon of salt and taste it. Only after that, add the pasta and continue to cook without lowering the... 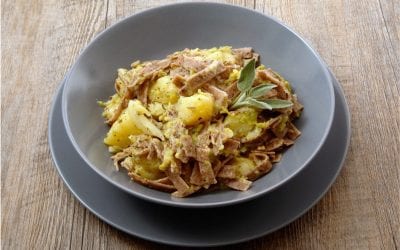 Traditional Pizzoccheri of the Pastificio Chiavenna, are produced according to ancient local traditions and made with durum wheat flour and buckwheat flour better form a kind of food containing high protein food and natural fibers. Pasta made from buckwheat contains... 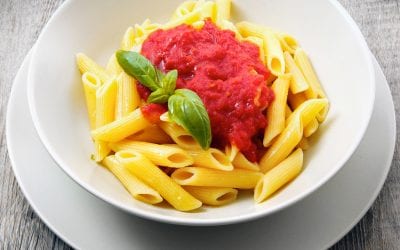 Tomato sauce pasta is the symbol dish of Italian cuisine. It is a very easy recipe but it ‘s important to cook correctly to have a great result. For this recipe, you can use the format of pasta that you prefer long and short: penne, fusilli, spaghetti, tagliatelle.... 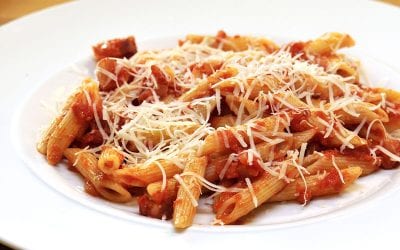 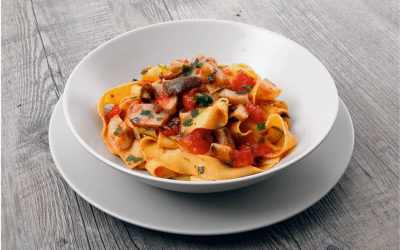 Tagliatelle with Mushroom Sauce is a classic autumn dish, flavourful and easy to prepare. Some variations of the recipe calls for cream, which however covers the taste of the mushrooms somewhat. It’s best to use fresh mushrooms, but you can also use dried ones, making... 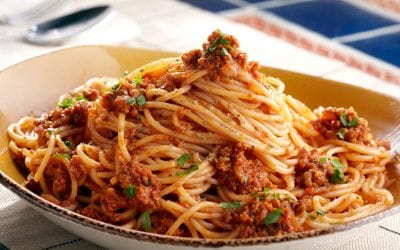 Bolognese ragu may be the most famous Italian sauce in the world, along with pesto. Outside Italy spaghetti with bolognese sauce is usually thought of as a spaghetti sauce, but this goes against tradition. It is usually used with special kinds of pasta like... 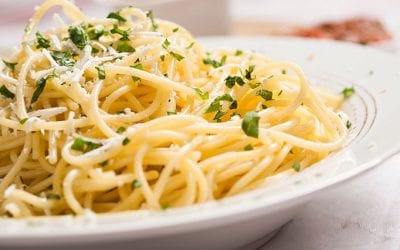 Spaghetti with Extra Virgin Olive Oil is the most simple dish. There are four basic types of olive oil and the Italian government strictly controls every single bottle before allowing it to bear the “extra-virgin” seal. The only oils which can qualify are those which... 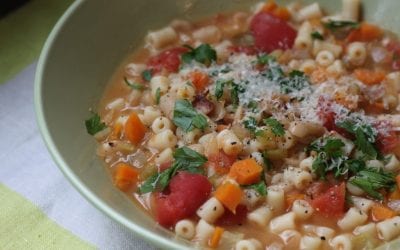 Pasta & Beans is more of a soup, prepared with different variations throughout Italy, where it spread immediately after the import of the first beans from the Americas, where they were one of the three pillars of native diets, together with maize and squash. At... 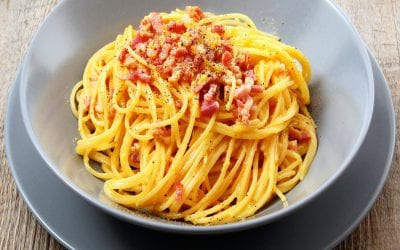 Carbonara Spaghetti is an Italian pasta dish from Rome based on eggs, cheese (Pecorino Romano or Parmigiano-Reggiano), bacon (guanciale or pancetta), and black pepper. Spaghetti is usually used as the pasta; however, fettuccine, rigatoni, linguine or bucatini can also... 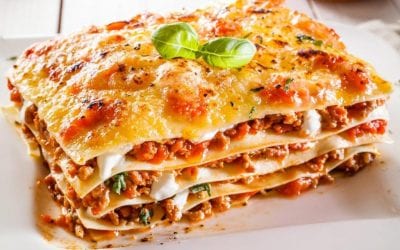