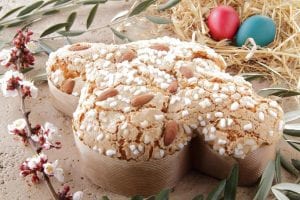 For the preparation of Colomba, there are three different leavings. The first dough is composed of flour, water, milk, and yeast and it must be left to rise for a couple of hours; then flour, sugar, and butter are added to the first dough, which should be raised for an hour and a half; the third and final mixture is the addition of flour, butter, raisins, eggs, sugar, salt, vanilla, and oranges to the previous mixture, and let it rise for 16 hours. After that the dough is put into a dove-shaped mold and coated with icing made by flour and cornstarch, egg whites, cane sugar and almonds, it also is garnished with whole almonds and sugarcane. Finally, Colomba is baked in the oven.

The birth of the Colomba (Easter Cake) is characterized by several legends:

According to tradition, Colomba is a sweet from Lombardy. It is reported that in 610 in Pavia, the Longobard Queen Teodolinda hosted a group of Irish pilgrims, led by San Colombano, to whom she offered a game-based dinner but the Saint declined because it was Lent. Theodolinda interpreted the rejection as an offense, so Colombano, blessing the game and turned it into white doves of bread.

Second legend: Pavia and the siege of Alboino

In 572 the  King Alboino besieged the city of Pavia. After three years of sie, the barbarians won and entered the city. The inhabitants of Pavia, in order to avoid their fury, gave them soft desserts in shape of doves. An action of peace that avoided the plunder and so Pavia became the capital of the newborn king.

Third legend: the battle of Legnano

In 1176 during the Battle of Legnano, a city near Milan, the legend tells that a leader of a chariot saw two doves above the signatures of the Commons League, careless of the approach of the battle. To encourage his men, the captain ordered the cooks to prepare bread in the form of the dove, with eggs, flour, and yeast.