The History of Colomba

The History of Colomba starts with a legend, but first let’s talk about what actually is, Colomba. The Colomba Pasquale is the typical leavened cake of the Italian tradition, which is brought to the table on Easter day together with the Neapolitan Pastiera; and is given near the Easter holidays as a symbol of peace and love. It is often placed side by side with a chocolate egg which instead represents the Resurrection. Among the Colomba sweets, few have the symbolic power of the unmistakable dove and that simplicity of the dough and that sentimental sweetness of the almond glaze, which never slips towards the “sinful” chocolate. Many legends have flourished around it. The history of Colomba perhaps starts to hide an origin that is actually much less noble? Let’s find out by delving into the magical world of the dove.

The name Colomba properly refers to the commercial idea dating back to the 1930s when Motta, a confectionery company already known for its panettone, had the intuition to create a Colomba cake along the lines of the Christmas one, in order to use the same machines, but also the same ingredients, not only during the Christmas period. Many of the ingredients of the classic Colomba and panettone are in fact the same: flour, eggs, butter or other fats, sugar, yeast, candied oranges. The dove was initially characterized by the use of honey and its covering of almonds and sugar glaze. Today the variations are many, with fillings of cream, chocolate or other and various decorations on the surface. 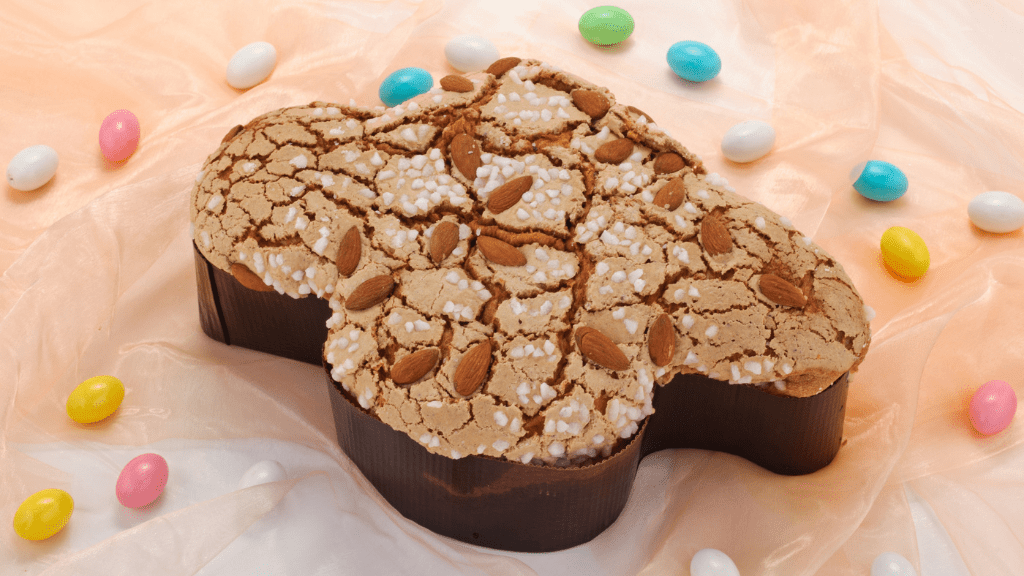 The history of Colomba name starts with a legend which states that the origin of the dove dates back to the Lombard period, when King Alboino, during the siege of the city of Pavia, which lasted about three years and ended just before the Easter period, received as a gift from the local population a sweet bread in the shape of a dove as a sign of peace. According to another tale of the Lombard tradition, the first creator of the dessert was San Colombano, a famous Irish monk who founded numerous monasteries throughout Europe (in Italy the one in Bobbio is famous). This holy man came to the court of the Lombard kings, who invited him to a sumptuous lunch. Queen Theodolinda had a mountain of delicacies and appetizing meats prepared, but San Colombano did not want to transgress the abstention from meat commanded in time of Lent. To overcome the embarrassment of the situation, the monk agreed to eat the meal after having blessed the courses. When the man laid his hands on, however, the meat dishes turned into white doves of bread!

The Colomba is the other dessert par excellence of the Easter tradition. Like also specified in the Interministerial Decree of 22 July 2005, the the denomination “colomba” is reserved for “a pastry baked product soft, obtained by natural fermentation from sour dough, shaped irregular oval similar to the dove, a soft honeycomb structure elongated, with top glazing and a decoration composed of grains of sugar and at least 2% almonds “. Therefore there are ingredients that mandatory must be present in the recipe: wheat flour; sugar; category “A” chicken eggs or egg yolk, or both, in quantities such as to guarantee not less than 4% in yolk; butter, in quantities not less than 16%; candied citrus peel, not in quantity less than 15%; sourdough natural yeast; salt.