Cheese pairings with prosciutto play an important role when creating the perfect prosciutto board. And depending on the type of meats – prosciutto, coppa, speck, porchetta – one can pair different types of cheese.

So we gathered some suggestions:

• Among all the nice cheese pairings with prosciutto, one of the greatest is provolone, because of its smooth and delicate cheese texture that contrasts the sweet-savoury flavor of Prosciutto.
• Speck has a smoked taste which pairs great with the nutty and sweet flavor of Asiago.
• Coppa, is amazing when paired with provolone or Gorgonzola which has a rich creamy texture.
• Porchetta, traditional meat of central Italy can be paired with smoked Provolone.

Some classic pairings though are prosciutto with either parmesan, pecorino or grana padano! 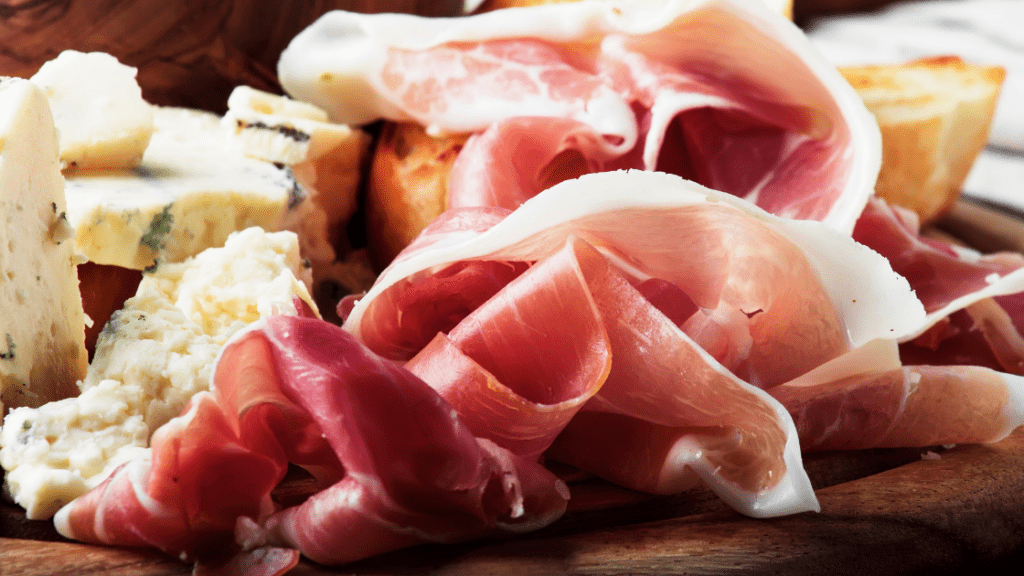 Prosciutto can be sliced into little cubes and added to pasta with some melted pecorino! Pecorino is in fact a cheese made from sheep’s milk; in particular, it is a hard sheep’s milk cheese, since its humidity is less than 40%…It has many health benefits too! Or maybe you could take a slice of grana and wrap a slice of prosciutto all around it to make it an amazing appetizer and for parmesan, you could try it with pasta, but this time you might want to grate it on top of the pasta dish! If you didn’t know Grana Padano D.O.P. is part of parmesan cheeses with very interesting name origin and with a very important production, as well as its trade abroad. It is produced in the regions of Lombardy, Piedmont, Trentino Alto Adige, Veneto and Emilia Romana. The semi-fat cheese made from cow’s milk requires a long seasoning. Grana Padano to be called Riserva has to be stored for at least 20 months. The paste is crumbly, with medium-high, persistent aromatic intensity.

If you want to go with a classic you could try it with parmesan cheese, which is perhaps the best known Italian cheese in the world, also for the well-known events related to the countless attempts at imitation. It is produced in the provinces of Modena, Reggio Emilia and Parma, part of the provinces of Bologna and Mantua, with partially skimmed cow’s milk by surfacing. The seasoning must be at least 12 months and, if it lasts for 18 months, it is branded as Extra. The paste, typically “grana”, is crumbly, with a medium-high aromatic intensity.

Also do not forget that especially for the summer mozzarella is a must! buffalo mozzarella is one of the most copied and imitated Italian products but only in Italy, you can find the real one. The Mozzarella di Bufala Campana is a fresh stretched curd cheese, which owes most of its unique characteristics to the fresh buffalo milk produced in the traditional area of ​​origin. According to the PDO legislation, the only area in which it can be produced mainly includes Campania, with the provinces of Caserta and Salerno, as well as some municipalities in the provinces of Naples and Benevento; Lazio, with some parts of the provinces of Latina, Frosinone and Rome; Puglia, with some municipalities in the province of Foggia; Molise, with the municipality of Venafro.

As you can tell by now, prosciutto and cheeses go along so perfectly…There’s honestly no wrong way to pair them together! Have fun, be creative and enjoy these Italian products.

Now it’s up to you to try and enjoy them with family and friends.