Taralli is a peculiar Italian bread that originates from the region of Puglia which is located on the ‘heel of the boot’ when you look at the shape of the country.

This region is also famous for other amazing foods like orecchiette, pasticciotto (a dessert with a creamy custard center) and last but not least…taralli, Italy’s favorite snack!

They were created during the late 8th Century by poor workers in Puglia who wanted to make something edible out of left-over scraps of dough since they were starving.

Through the years they have become one of the most common snacks in the country, often served at aperitivo, they have a convenient size and delicious flavor. Taralli are traditionally shaped into rings that vary in shape and size…no one is like the other! Also, the texture is crunchy and makes a type of crunchy baked bread.

All ingredients are mixed together till forming small strings to then create little rings in order to form the final shape.

Then the rings get briefly cooked in a pot of boiling water and when they float to the surface they get removed and cooled on a cloth. In the next step the taralli are being placed on baking trays and cooked in the oven so that they can get golden brown and crunchy on the outside.

Tarallo specialists claim that it should be eaten soaked in sea water. Today this refinement must be avoided, given the state of our seas: but even in the past, this use must have been responsible for many gastroenteritis. Taralli are an entirely Neapolitan whim. It is still a classic to buy them in Mergellina, in the kiosks located on the seafront, and munch on them while walking with Vesuvius on one side and Posillipo on the other. Once up on a time the Neapolitan taralli did not wait for customers in kiosks, or in bakeries, as they do today; they met him on the street. 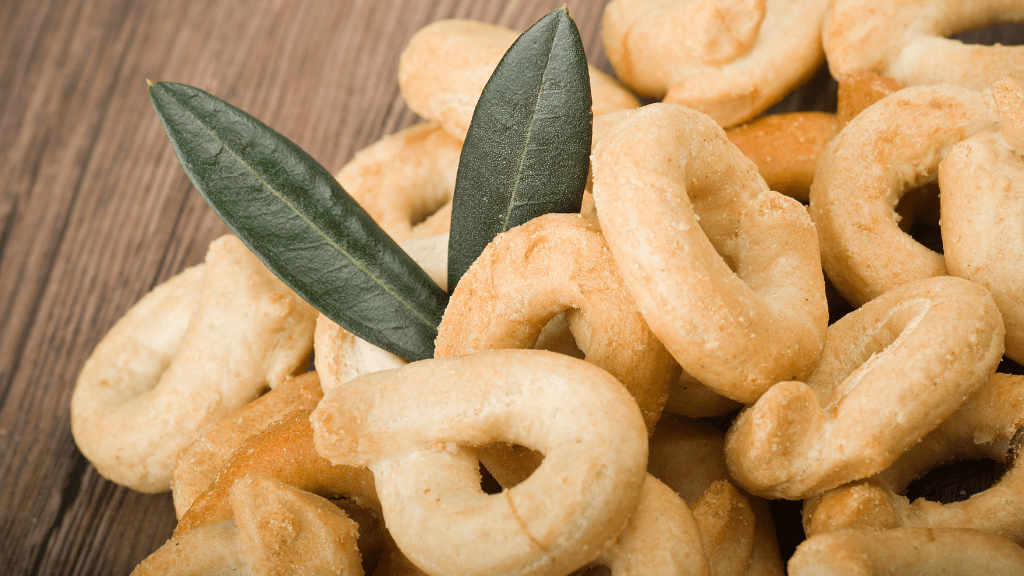 The Apulian tarallino spread in Italy (and abroad) before the Neapolitan one. Already in appearance, it appears very different from its Neapolitan cousin: smaller, smoother, smaller in size, it is made with olive oil, and does not have almonds. Often fennel and / or chilli seeds are added. The Apulian tarallino probably originates from the Greek “daratos”: from that Greek “sort of bread” from which the Neapolitan tarallo also comes. But then it took a different path, thanks to the olive oil from the board of Puglia which has become a fundamental ingredient. . The Apulian tarallini have always been as small as they are now. Its small size, associated with a low caloric value (they do not contain lard!), Have made them very suitable as an aperitif.

Taralli of Putignano are strictly handmade with genuine ingredients and cooked in ancient wood-burning ovens, the fragrant rings of unleavened dough, in the classic recipe, are based on olive oil, white wine and salt. Tasty variations, from onions to olives, from sesame, chilli, pepper to Murgian mushrooms. A typical culinary delight of Putignano is also the Farinella, a flour of barley and toasted chickpeas, tasted in powder with dried figs and wild onions. Transforming itself into a funny Joker, the Farinella gives its name to the typical representative mask of the Putignano Carnival.

The recipe can also be adapted in order to incorporate an array of flavors just like pepper and fennel seeds or even sweet ingredients to create the perfect after dinner snack to serve in aperitifs or in tastings of good Apulian wine. The seasoning in the preparation of Taralli boasts countless variations linked to the production area and the Apulian ovens produce all kinds of them: with fennel seeds or pizzaiola, onion or pepper and even chocolate, sugar or egg white.