Between the nineteenth and twentieth centuries the Giuseppe Giusti Balsamic Vinegars made themselves known all over the world and enjoyed unanimous success among the European public. Presented at the various International Exhibitions of the Belle Epoque thanks to the initiative of Giuseppe and after him Pietro Giusti, the 30, 50 and even 100-year-old Balsamic Vinegars that are the pride of Giusti production won numerous prestigious medals, 14 of which gold .

The quality of the Giusti Balsamic Vinegar conquered the King of Italy Vittorio Emanuele III, who decided to appoint the Righteous “Suppliers of the Royal House of Savoy“, granting in 1929 the high privilege of exhibiting the relevant coat of arms. Due to its historical significance, the royal coat of arms still stands out today on the packages of Giusti Balsamic Vinegar. 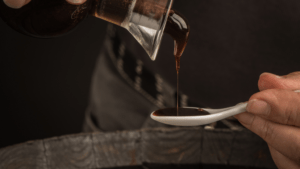 It was a very prestigious moment because Vittorio Emanuele III was a king under the Fascist period. He was the only son of the then King Umberto I of Savoy and Margherita I of Savoy. The rigid military education caused him to develop a shy but reflective character. To strengthen the Savoy influence in the Balkans, at the age of 27 Vittorio Emanuele III married Elena of Montenegro with whom he had five children: Iolanda, Mafalda, Umberto, Giovanna and Francesca. Following the assassination of his father Umberto I by the anarchist Gaetano Bresci, Vittorio Emanuele III then at 31 years old found himself swearing to become the new king on 11 August 1900.

After some good successes in both domestic and international politics, his reign was however characterized by the two great world conflicts. After an initially neutral position, Italy took part in the First World War by declaring war on Austria. Even if in the end the outcome was victorious, the country paid a very high price in human lives. The first postwar period marked the rise of Benito Mussolini, with the fascist state becoming a reality in 1924 as well as the colonial empire which included Albania, Libya and the Horn of Africa. Following the outbreak of the Second World War and the disastrous results. Vittorio Emanuele III thus turned his back on Mussolini, signed the armistice and took refuge in Brindisi where the Allies were. Without abdicating, on 5 June 1944 he entrusted the Lieutenancy of the Kingdom to his son Umberto I. The official handover, however, took place on May 9, 1946, a month before the Constitutional Referendum. Given the victory of the Republic, Vittorio Emanuele III died on December 28, 1947 in Alexandria in Egypt. Almost seventy years after his death, the king’s body is now about to return to Italy, causing great controversy.