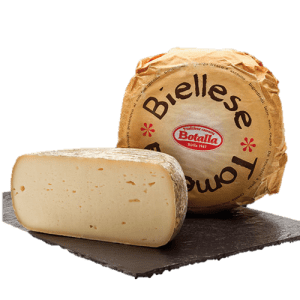 The city of Biella, in Piedmont, and the neighboring area is known throughout Italy for the secular tradition of its cheeses. One of the most famous is certainly the Toma Biellese, according to history it was the favorite cheese of the Queen Margherita of Savoy who considered it the best cheese of the Alps. In the past, the cows grazed in the mountains, so the Toma cheese was a real product of the alpine area, so often shepherds bartered them with rice or wheat or other non-cultivable products in the mountain areas.
Toma Biellese, a certified PDO product from Piedmont, is produced with whole or partially decapitated whole vaccine milk. The maturation period is medium-long and it varies between 2 and 6 months.
This cheese has a cylindrical shape of 30-35 cm in diameter and weighs about 6-8 kg. The crust is fairly soft and thin, with a grey color with white shades; the dough, on the other hand, is straw-yellow.
It has a sweet and slightly aromatic taste if the product is young; it becomes more intense and spicy if it his more seasoned.
The Toma not too aged is perfect to be added to the preparation of the “polenta concia” while the cauldron is still on fire so it can be dissolved, then the polenta is removed from the fire and it is added the fried butter. Another Biellese dish with Toma cheese is the “rice in cagnone”: boiled rice seasoned with small cubes of Tomato and loose butter. Furthermore, the cheese can be accompanied by apple and grape mustards typical of the Biella area.
The Toma Biellese is perfect with dry white wines if it does not have a long ripening, or with Piedmontese red wines if instead it is aged. 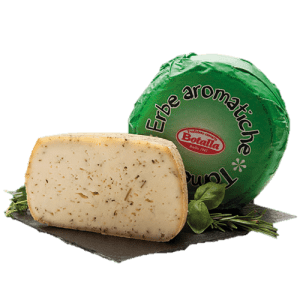 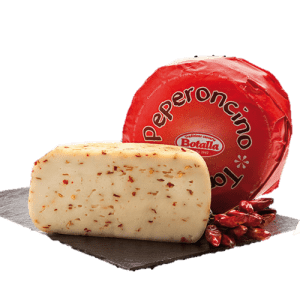