In 1843 Angelo Tomadini opened a bakery in Pordenone, starting the production of fresh pasta then dried.
The company Tomadini has always been handed down from father to son produces quality products that people appreciate, the production grew in a very short time, so that the family opened several stores in the same city of Pordenone, in order to meet the requests.

In 1930 the Tomadini family decided to buy a new building, transforming it into a modern pasta factory, where new machines for the production and drying of pasta will be added. Tomadini pasta began to be sold outside Pordenone.

In 1944 a new pasta factory was inaugurated in Rezzato (BS), also providing the most modern production technologies of the period to guarantee its ever-growing clientele a better product.

In 1968 the new plant was inaugurated in Pordenone. In those years, Tomadini acquired other pasta factories in Friuli and eastern Veneto, thus becoming the major region in the Friuli Venezia Giulia region and making its pasta a daily consumer product in many families in North-East Italy.

with the modernization and automation of the processes, the production was concentrated in the Pordenone plant, closing the others in Friuli and transforming the Rezzato (BS) factory into a logistic center for destruction.

In 1998 until today Luigi Tomadini carries on the company with love and passion, continuing the work carried out by previous generations. 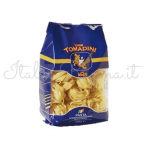 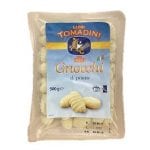