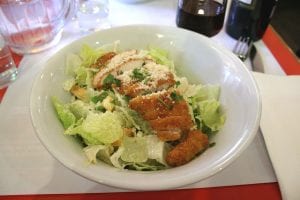 Caesar Salad is the most famous American salad, but few know that it was created by Italian chef Cesare Cardini, emigrated to the United States after the First World War. It is not the usual salad, but it is flavored with chicken and bacon to be also suitable for those who do not want a plate of only vegetables.

Begin with the sauce: put the yolks in the mixer’s glass and add the cider vinegar, mustard, pepper, and salt. Begin to stir and unite the seed oil. When the sauce has reached a creamy consistency join the anchovies and grated Parmesan cheese. Smear again, then put the salsa in a bowl.

Cut the sliced bacon and let it brown in a pan for 2-3 minutes until it becomes crispy. Remove it from the fire and let it dry on a plate with a sheet of absorbent paper.

Now the chicken cuts it into strips and adds it to the frying pan where you have browned the bacon. Garnish for a few minutes then remove it from the frying pan and set it aside in a bowl.

Now cut the bread and add it to the usual frying pan with a pinch of oil. Contain them with pepper, salt, and oregano and make them golden until they become crunchy. Remove them from the fire and keep them aside in a bowl.

Serve the Caesar Salad by putting the Roman lettuce leaves on the bottom, combining the croutons of bread, crispy chicken, bacon, parmesan flakes, and seasoning it with the sauce obtained.