At the origin of the Bottoli project, there is the idea of “giving the right shape to the bread because every moment is good!”

Thus Alcide Bottoli and his sons Angelo and Luigi in 1959 gave birth to the Profondamene Company rooted in the traditions of one of the most important Italian provinces for gastronomic vocation, Mantua.
Today, the BOTTOLI SPAINDUSTRIA PANIFICAZIONE, is a leader in its field, thanks to the ability to reinvent the bread continuously, interpreting and anticipating changes in lifestyles, tastes and ever-evolving needs of Italian families in terms of health and food safety.

Bread is one of the most popular foods in the world with infinite variations related to the resources and traditions of places of origin.
Already in the time of the Gonzaga (16th century) in Mantua, the bakers made a substitute for bread, the schizzada, the antennas of today’s crushing.
At that time, it is the oldest evidence of the Schiacciatina traceable in the poem “Baldus” published in 1517 by the famous manuscript Mantuan Teofilo Folengo.
The schizzadas were made only with flour, water and salt and they were cooked “on a warm stone of a hearth, well-covered with quail …” and were the food of excellence of the peasants who consumed them in the place of bread at work in the country side. 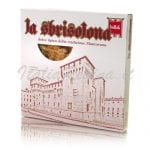