In the heart of Milan, the Four Marias roamed the streets of the city in search of the needy, to whom they would give a copper coin to exchange for bread and flour at their Bakery in largo Corsia dei Servi, dating all the way back to 1150. Eventually the Four Maries became three because of the removal of the Virgin Mary image outside of the bakery. Luckily, the leaven bread was enriched by adding dried fruit, eggs and sugar, and became this special candied fruit bread smelling of butter and with a browned crust that is now a part of Milanese holiday tradition, the panettone.

In 1896, the award winning pâtisserie had a frontage of two large windows where the confraternity’s Bakery used to be, right in the middle of Milan, where Tre Marie became a meeting place for intellectuals, writers and lovers of sweet food.

Tre Marie started to offer it products also to pâtisseries that didn’t belong the co-operative in the 1960s. The pàtisseria thus enabled many Italian pâtisseries that wouldn’t have been able to undertake production themselves to offer their customers a quality panettone. By then production was organized on a large scale and their first factory was built in Lambrate (Milan), where Tre Marie is still headquartered today. 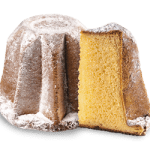