The I.L.C. Mediterranea S.p.A has been producing buffalo mozzarella for more than three generations. With their selected and consolidated assets and their professional knowledge, I.L.C La Mediterranea S.p.A operates on the market as a leading company.

Its foundation can be traced back to after–World War II, when Francesco Mandara founded a chain of creameries specialized in milk and milk derivatives. During the 70s, the Company went through a period of great growth: and the retail  business expanded up to eight stores in the cities of Naples, Rome and Milan. The plant was taken over by the founder’s grandchildren Giuseppe and Elisabetta Mandara in 1983. This change in the Company Management will result in massive changes to the company image, that will become market-oriented, by opening to an high number of distributors to increase penetration in Northern Italy and foreign markets (North America and Europe).

Mandara saw different consumers styles and habits in different countries as an opportunity, and developed ad-hoc offers for foreign markets which led the company to stand out as a leading international manufacturer of buffalo products. In 1997 it became a joint-stock company (SpA), and in the same year, I.L.C. La Mediterranea S.p.A. set up a partnership with the large traditional food products marketing group  Alival S.p.A., which allowed the Company to outsource the distribution tasks and focus on its production expertise.

Its on-going innovation research, with respect for tradition, has characterized I.L.C.La Mediterranea S.p.A. from its founding to present: with over 15 different product references, more than one hundred thousand pieces, between Buffalo-milk Mozzarella under its own brand, and Mozzarella di Bufala Campana DOP (PDO, Protected Denomination of Origin), leave the Mondragone plant to worldwide destinations every day.

The Mozzarella Mandara di Latte di Bufala (Mandara Buffalo-milk Mozzarella) is produced by the noble buffalo milk, rich of vitamins, total protein, minerals, phosphorus and calcium: just to be tasted in all its exquisiteness and freshness. 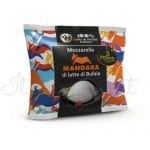