Angelo Poretti first learned about his dream when he took a trip to Austria, Bohemia, and Bavariato learn from the best brewers. He then opened his own brewery in 1877 in the land of Valganna where there was pure water which was an important ingredient for quality beer. This land is still the heart of his brewery for over 130 years. in 1881 he Poretti was asked to partake in the National Expo of Milan and with years of dedication and work their brewery was chosen at the EXPO 2015 Milan, to be the official beer of the Italian Pavilion. 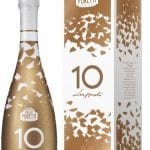