Salumificio Giuseppe Citterio was founded in 1878, a year that would lead to an history of five generations of family-run business. Today the name Citterio is synonymous around the world with professionalism, passion, innovation and quality. Citterio chooses to produce its cured meats in the regions where they originated, reinforcing the ties between the land and its traditional recipes. A centuries-old experience which guarantees goodness and excellent quality meets industrial culture, allowing these flavours to arrive intact on tables around the globe.

ORIGINS: In 1870 Giuseppe Citterio is a young delicatessen worker who opens his own deli in Rho. He creates his own recipe to produce and conserve pork: the Salame di Milano. Then, in 1878, Giuseppe Citterio realises it would be possible to take his production, which at the time followed the seasons, and make it year-round. His entrepreneurial vision became reality in just a few short years: he bought a piece of land on the outskirts of Rho and built a model factory. In 1881 Citterio participates in the Esposizione Nazionale di Milano (National Expo of Milan), the first great exhibition of Italian industrial production. Thanks to the high quality of his product, Citterio wins the first official recognition the Medaglia d’Oro (Gold Medal). Between 1891-1894 due to the particular care which is put into the preparation of his products and his innovative production processes, Giuseppe Citterio is awarded another 5 Medaglie d’Oro in just 5 years.

1940s: Citterio’s expansion continues, when production stops completely following the military occupation of the factory in Rho. Once the war ended, Citterio begins again from the start and in just a short time reconquers his place as a key player in the cured meats industry.

1950s: Production is mostly distributed for export, but domestic demand begins to increase and the Italian market begins to pique Citterio’s interest. in 1955 Citterio becomes the first food company in the world equipped with an in-house chemistry and microbiology analysis laboratory. Not only that, but it inspects and verifies the work environment to guarantee safety and quality in all production phases. In 1958 continuing on towards the height of research into quality and the guarantee of fresh, authentic flavours, Citterio invents and begins producing vacuum-packed cold cuts, another great innovation in Italian charcuterie.

1960s: Citterio begins to expand the range of products offered and adds new specialties by researching the typical products which characterise various regions of Italy. Meanwhile, the commitment to offering tighter-controlled products in terms of quality grows and the new packaging created responds to new demands from consumers and changes in society.

1970s: the main goal is to increase the attention on traditional Italian products abroad, especially overseas, despite laws which limit imports from Italy. In 1974 Citterio opens a factory in the United States in Freeland, Pennsylvania.

1980s: the market of pre-sliced meats grows. Passion for the industry, respect for traditions, and attention to new market demands strengthen the company’s identity as it obtains major quality certifications recognised around the world.

1990s: quality, the best raw materials, research, and innovation have always been cornerstones of the business. They are also embraced by the fifth generation of the Citterio family as it begins to lead the company and place particular attention on reducing environmental impact during the production and packaging phases.

In 2008 the facility in Santo Stefano Ticino is opened. This location is dedicated to the production of cold cuts and mortadella, it’s designed to be respectful of the environment and traditions.

TODAY: Citterio is still a family-run business directly managed by the descendants of Giuseppe Citterio. Its focus is still that of years ago: quality products, innovation, and traditional flavours. 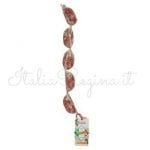