For more than 80 years Cavicchioli has devoted himself to the art of producing wine with extreme respect and pleasure.

At the end of the 1920s, Italy discovered that it had immense treasures of archeology, beautiful landscapes and therefore an invaluable potential for a new business: tourism. In the unique heritage of the world are also native grapes that color the vineyards of Belpaese.

In San Prospero, a small village near Modena, in that same period, a man with a passion for his land, rich in beauties and history, like most of Italy, has transformed a laboratory behind the house into a cellar. He was the first to have the desire to press lambrus grapes, to ferment the must into barrels and to bottle it when the moon was “good”. He is Umberto Cavicchioli and to his sorbara lambrusco he wanted to give a symbol: Tradition.

Everything officially begins on 6 April 1928 and is just the beginning. Over the years the family has become numerous, the work grows and gives a hand in what has become a company there are also the sons Umberto, Franco, Romano and Piergiorgio. Cavicchioli grows, but Italy also grows. The 1950s are the years of reconstruction, Italy is poor but always beautiful and bets on its creativity, winning. It comes in fact to the Sixties on board the four wheels even though it is with a Lambretta most of the time it moves. How to make those six kilometers between San Prospero, where bottling of the company Cavicchioli remains, and Bomporto in the hamlet of Sorbara, where the grapes are worked in a new building located in the middle of the farm estate. The company is decentralized and the family is more and more united. In 1964, while a young Gigliola Cinquetti wins the Sanremo festival with “I’m not the age”, Umberto decides that her children are the age to inherit the company. And so with them the distribution network increases and becomes national. At the thresholds of the Seventies, the desire for freedom and transgression comes from abroad, we export the Lambrusco Cavicchioli, an expression of freedom and tradition.

Then there are years of strong distributive growth, until it is time for new generations to enter the management and the grandchildren Umberto, Sandro and Claudio arrive. The style and the name Cavicchioli are becoming more and more a landmark in the Lambrusco Modenese world, until today, where the Cavicchioli Cellars can rightly say the synthesis of an Emilian wine epic that has become a family saga Wine-growing reality kept in the portfolio of the great brands of a national reality.

Cavicchioli proudly Lambrusco. When a wine becomes a pleasure.

Growing near a river means growing in to the idea of ​​”movement”. Water moves, goods move, people move. In the lowlands of Lower Modena, two steps from the Secchia and Panaro rivers, the wine is also called Lambrusco. To make it “move” as it is, the Cavicchioli family has begun in 1928. A Modenese family in the soul and not just the registry, which alone expresses the modern valorisation of this unique wine. Everything begins in San Prospero in the province of Modena in the center of the Po Valley, in a fertile and rich land.

In the shadow of the symbols of Modena such as the Duomo, San Geminiano and Ghirlandina, many beautiful and important things have been born, among them there is surely Lambrusco and Lambrusco Cavicchioli.

The Cavicchioli vineyards extend near farms for 90 hectares in the territory of Sorbara and the surrounding area, in the DOC area, between the rivers Secchia and Panaro. The bottling and bottling cellar has always been in San Prospero, it has never moved, while the cutting edge of technological tools has been moved in terms of avant-garde technology. The constant goal is always the same: to produce only the Lambrusco of quality maintaining unchanged the spirit that loves to look forward and to coat of refined technique an old, congenital way of making good wine.

The family is of great importance. The brothers Cavicchioli, Claudio and Sandro, the nephews of the founder Umberto who for many years moved the company, creative and entrepreneurs, Emilian genes, about movement, Rosso Ferrari have been able to fully accompany the Red Lambrusco. 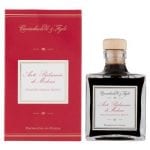